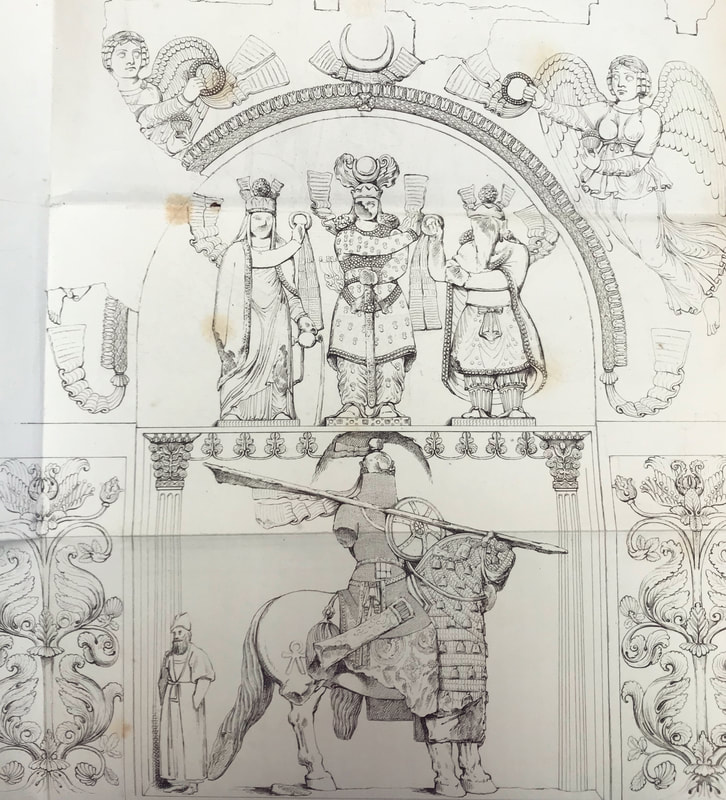 In the last decades of the 2nd century BC, envoys from the Han dynasty of China were met on the banks of the Oxus River (modern Amu Darya) by an escort of Parthian cavalry. The Chinese historian Sima Qian (c. 145–86 BC) reported that “twenty thousand horsemen” were sent by the Parthian king to accompany the envoys on their journey, and that this news “delighted” the Han emperor.[1] This official meeting of delegations marks the beginning of what we today call the Silk Routes, a network of trading arteries extending from China to the Mediterranean. During this early period, between five and ten caravans were sent westwards from China each year, carrying precious commodities that included silk.

Various objects in the Epic Iran exhibition highlight the artistic richness of the Parthian Empire (c. 238 BC–AD 224) and the successor Sasanian Empire (AD 224–650), both of whom controlled large swathes of the overland trade routes for almost eight centuries. We perhaps see this dominance most clearly from the opulent textiles in which the kings and elites clothed themselves.[2] A sandstone statue dating to the 2nd century AD shows a Parthian figure standing with a hand raised in a worshipping gesture. He wears a belted tunic over trousers, incised with delicate lines that indicate the detailed pattern on his costume. The cuff of his tunic is trimmed with a band of intertwining spirals. More braids of spirals run down the front of the tunic, as well as long stripes that have been divided into lozenges and embellished with circles - perhaps precious stones or luminous pearls.

At the western end of the Silk Routes was Rome, whose elites also coveted China’s luxurious silks. It is supposed that the first time that Roman eyes encountered such textiles was during the Battle of Carrhae fought against the Parthians in the spring of 53 BC. At the helm of the Roman forces was Marcus Licinius Crassus, the Roman Proconsul in Syria. Driven by his greed for glory and fortune, he sought to conquer the Parthian capital of Seleucia-on-the-Tigris (near present-day Baghdad, Iraq). The Parthian king Orodes II responded to the planned invasion by sending the distinguished general Surena with his own army. As Crassus’ forces struck out across the arid dunes of northern Mesopotamia, they were met by Surena at Carrhae (near present-day Harran, Turkey). The Roman battles lines quickly disintegrated as the Parthian cavalry fired endless arrows and fixed their spears on their enemy. Recounting these events some two centuries later, the Roman historian Florus describes the Parthian military banners unfurling before Crassus in golden and silken flutters.[3] Ultimately, Rome suffered a humiliating defeat with thousand of its troops killed or captured, and several legionary standards seized by the victorious Parthians. While Florus’ account of the enticing silk banners is perhaps a spurious addition to the narrative, it is clear that he Roman world saw Parthia as a conduit for the precious material.

The silver coin from the British Museum’s collection was struck under Orodes’ successor, Phraates IV (ruled c. 38–2 BC), and showcases the opulent textiles with which the Parthian rulers adorned themselves. Phraates wears a V-necked jacket, its lapels threaded with a diagonal pattern and bordered by large beads or pearls. An eight-pointed star can be seen at the top of the sleeve, while a winged mythological creature is positioned over the king’s chest. In addition, the king wears a multi-ribboned diadem band around his head as a symbol of kingship, and a torque necklace made up of five spirals and terminating in another leaping mythical creature. Such envious images of opulence undoubtedly made an impression on the elite citizens of Rome.

As well as silk from China, the Romans sought spices, pearls from the Persian Gulf and Indian Ocean, and unguents such as frankincense from the Arabian Peninsula. The problem was that a large volume of these goods were transported across the overland trade routes that threaded through the Parthian Empire – Rome’s greatest rival in the East. The desire to acquire these luxurious goods was funnelling Roman wealth into their enemy’s hands. Writing in the 1st century AD, Pliny the Elder moralised on this appetite for the ostentatious, which he saw as a drain on the state’s finances: “by the lowest reckoning India, China and the Arabian peninsula take from our empire 100 million sesterces every year – that is the sum which our luxuries and our women cost us; for what fraction of these imports, I ask you, now goes to the gods or to the powers of the lower world?”[4] Although Roman statesmen tried several times to introduce sumptuary laws to limit the wearing of extravagant silk garments, they were unable to extinguish the high demand for these products. The Parthians were clearly aware of their geographical advantage in the trade of these commodities. In the annals compiled by the Chinese historian Fan Ye (AD 389–445), it is said that the Parthians deliberately discouraged Chinese traders from attempting to reach western markets directly via the sea route. Instead of circumnavigating Parthia, Chinese merchants were largely compelled to channel their goods overland through its territories.[5] Parthian rulers and merchants had much to gain economically as the middlemen in the trade system.

The luxury trade stirred much of Parthia and Rome’s exchanges, from the high fashion clothing styles that percolated through Parthia’s borders into Roman caravan cities such as Palmyra (in modern Syria), to bloody wars waged over lucrative trading arteries. In AD 114/5, the Roman emperor Trajan successfully invaded Armenia and northern Mesopotamia; he then marched southwards to the port city of Charax Spasinou, extending Rome’s trade links to the Persian Gulf for a brief period. Although Parthia eventually wrestled these regions back into their sphere, Rome continued to challenge their hold here right until the end of the Parthian period.[6]

Under the Sasanians (AD 224–650), the demand for expensive commodities was no less voracious, and conflicts with the Roman Empire, and later the Byzantine Empire, continued to ripple across important trade routes. Shapur I (ruled AD 240–272) famously defeated three Roman emperors – Gordian III, Philip the Arab and Valerian – in the western reaches of the Sasanian Empire. Shapur also asserted his power in Armenia and in the Kushan Empire of Central Asia. The development of a strong maritime presence expanded Iran’s reach even further afield.[7] Exports of glassware were distributed widely. An iconic decorative feature on Sasanian glassware can be seen in the bowl from The Sarikhani Collection: round facets that have been cut with a wheel into the surface of the vessel and polished into smooth, clear pools. Bowls similar to this have been found as far away as China, Korea and Japan, including in the tomb of Japan’s Emperor Ankan (ruled AD 531–536).  Examples of Roman glassware have been found in similar contexts as well, such as a blue glass dish that that had been painted in a Sasanian workshop before it found its way into a late fifth-century tomb at Nara.[8] These items may have reached the Far East indirectly through overland trade exchanges, or possibly through a more direct transaction between Sasanian merchants and those who they encountered along the sea-routes.

To come back to the eponymous commodity of the Silk Routes, the woven textile from the V&A’s collection is one of two surviving early silk objects that are displayed in the Epic Iran exhibition. This fragment, which dates to the end of the Sasanian period or to the early Islamic period, shows the mythical Senmurv bird (Simorgh in modern Persian) in yellow on a green ground.[9] The fabulous winged creature, which is made up of the head of a dog, the claws of a lion and the tail of a peacock, is set inside a medallion with a border of large, round pearls. Although here we are dealing with a fragment of a larger textile, a similar design can be seen on the costume worn by the armoured horseman carved in rock in the large grotto at Taq-e Bustan in north-west Iran, dating to the time of Khosrow II (ruled AD 591–628). On the walls of the arched grotto, figures taking part in the boar and deer hunting scenes also wear beautifully decorated silk garments

In later centuries, precious textiles patterned with Sasanian motifs continued to hold currency in movement of silk westwards. Crusaders would wrap prized relics in pieces of silk before transporting them back home. This is probably how the V&A’s textile came to Europe – two other pieces from the same weaving were deposited in the reliquary of the church of St Leu in Paris and are now housed in the Musee des Arts Decoratifs.[10]

The objects highlighted here showcase the wealth of goods that were coveted by the Parthian and Sasanian nobility, and by their rivals further west in the Roman world. Iran held an important position as the middle player in the flow of luxury goods across the Silk Routes, a position that frequently brought military conflict to its doorstep. Nevertheless, both the Parthian and Sasanian empires successfully withstood Roman aggressions for more than seven centuries. During this period, the global network of trade routes allowed Iranian styles of dress and decorative arts to reach consumers across a large expanse, from the caravan cities in Syria and Iraq to the imperial tombs of Japan.