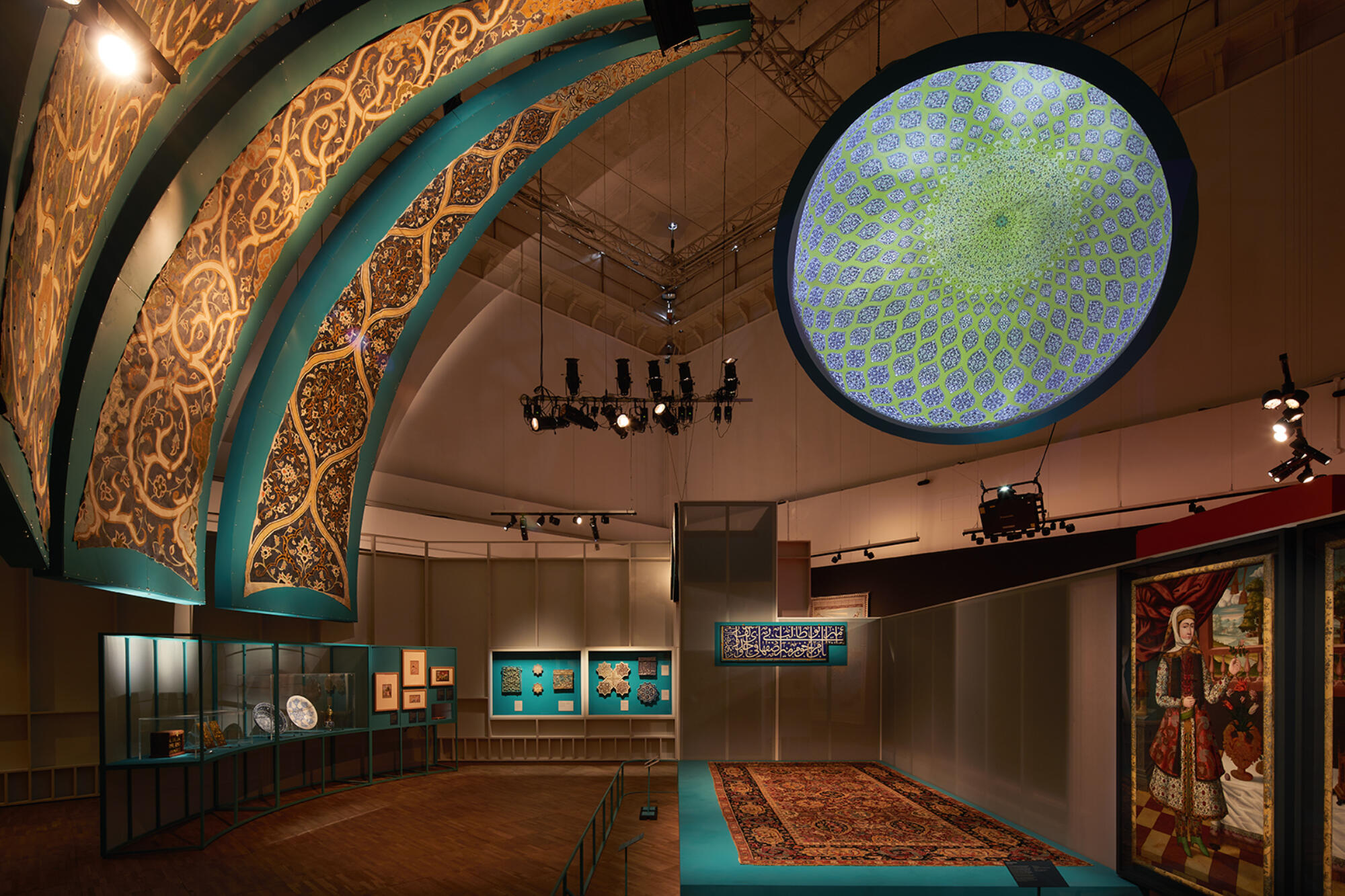 Epic Iran was arguably our most successful exhibition ever, with a sell-out show at London’s V&A museum. This exhibition was organised by the V&A with the Iran Heritage Foundation in association with The Sarikhani Collection. ‍

ARMLET, 500-330 BC, FROM THE OXUS TREASURE
© VICTORIA AND ALBERT MUSEUM, LONDON

The first section introduces the Land of Iran with striking imagery of the country’s dramatic and varied landscapes. Iran is home to mountain ranges, searing deserts and salt pans, as well as lush forests and varied coastlines - all of which have shaped the country’s social, economic and political history - and it is from this landscape that the artistic cultures covered by Epic Iran emerged over the past 5,000 years.

Beginning at the dawn of history in 3200 BC, marked by the earliest known writing, Emerging Iran will show that even before the rise of the Persian Empire, Iran’s rich civilisation rivalled those of Egypt and Mesopotamia. Animals and nature are a recurring motif – reflecting their importance in society at the time – with ibexes, gazelles, lions, and birds decorating pottery, cups, axe heads and gold beakers. The section will also feature figurines and items from everyday life including earrings, belt fragments, and a board game. The Elamites dominated south-west Iran during this time, but from 1500 BC Iranian-speaking people began arriving from Central Asia.

The Persian Empire will span the Achaemenid period, starting in 550 BC when Cyrus the Great was crowned king of the Medes and Persians, uniting Iran politically for the first time. With its capital Persepolis, the empire became the most extensive of the pre-Roman world, with a rich artistic culture. Archaeological finds reveal insights into kingship and royal power, trade and governance of society, which will be explored in this dramatic section through stone reliefs from Persepolis, originally painted; large-scale casts with colours projected on to them; and metalwork such as jewellery, coins and gold and silverware. Highlights include the Cyrus Cylinder – on loan from the British Museum – often celebrated as the first declaration of human rights, which can be misleading, and a gold armlet in the V&A collection from the Oxus Treasure.
​
The fourth section, Last of the Ancient Empires, will cover a period of dynastic change with Alexander the Great overthrowing the Persian Empire in 331 BC. The Greeks were quickly replaced by the Parthians, who were in turn defeated by the Sasanians. 400 years of stable reign followed: Zoroastrianism became the state faith and strong art and architecture traditions developed, with the Sasanian style enduring long beyond the dynasty’s fall. The section will showcase Parthian and Sasanian sculpture, stone reliefs, gold and silverware, coins, as well as Zoroastrian iconography. Highlights will include royal busts, such as a fifth century AD bust from The Sarikhani Collection, and a silver ewer from the Wyvern Collection, depicting women dancing.

John Curtis, co-Curator of Epic Iran said: “Visitors will be astonished by the quality and variety of objects from Ancient Iran, showing that it had a civilisation every bit as advanced and prosperous as those in neighbouring Mesopotamia and Egypt. It will be clear that the Persian Empire, founded in 550 BC, inherited a very rich legacy from earlier periods of Iranian history.

​The fifth section, The Book of Kings, is a prelude to the sections devoted to Islamic Iran. It shows how Iran’s long history before the coming of Islam was understood in later centuries – primarily through the Shahnameh, or Book of Kings, which is the world’s greatest epic poem, completed by the poet Firdowsi around AD 1010. Combining myth, legend, and history, the Shahnameh provides a widely honoured and therefore powerful version of events, rooting Iran’s long history in the minds of its people. Epic Iran will feature a series of elaborate illustrated manuscripts and folios depicting scenes from the Shahnameh, loaned to the exhibition from The Sarikhani Collection and British Library among others.

Change of Faith will explore the place of Islam in Iranian culture in the millennium and more that followed the Arab conquest in the mid-seventh century AD. The section introduces the Holy Qur’an, the text in Arabic that forms the basis of Islam, as well as the role of the Arabic language in Iran after the conquest. Arabic became the common language of intellectual life in the country, while the art of calligraphy in the Arabic script became highly developed and an important element in Iranian design. The section will also explore how conversion to Islam gave Iranians a new understanding of history focused on the Prophet Muhammad and his immediate successors. Disputes over the events of this period lie at the heart of the split between Sunnis and Shi’ites, and they took on great significance from the early 1500s, when the Imami form of Shi’ism became the country’s official religion. A number of exquisite Qur’ans and manuscript illuminations will feature, alongside a prayer rug, battle and parade armour, a celestial globe, and the magnificent Horoscope of Iskandar Sultan, on loan from the Wellcome Collection.

Charting the rise of Persian poetry, Literary Excellence will reveal how, from the tenth century AD, Persian written in the Arabic script emerged as a literary language in the royal courts of eastern Iran. Royal patronage meant manuscripts were incredibly refined and poetry became part of the visual arts because of the use of poetic inscriptions, which appeared on items including ceramics, metalwork, and even carpets. The V&A’s Salting Carpet includes verses by Hafiz in its border, whilst a bottle and bowl from the 12th century, decorated in lustre pigments, feature poetry in Persian. Much was also written in praise of rulers, with poetry finding its visual counterparts in art representing royal power.

Featuring rich material from the 13th century AD onwards, Royal Patronage will demonstrate how Iranian traditions of kingship were reborn after Islam, with the return of royal customs like robes of honour, the creation of lavish art and architecture, and an insight into internationalism as a two-way exchange. Recreating the splendour of Isfahan, three ten-metre-long paintings that replicate tilework patterns from the city’s domes will be suspended in arcs from the ceiling to suggest a dome interior. These will be displayed alongside an AV projection that uses the paintings to re-construct the appearance of the full dome. Technical architectural drawings from the nineteenth century and a selection of tiles will complement the paintings, and the section will look at how Iran took on influences from the wider world, from China and Europe in particular, as is apparent, for example, from the development of blue-and-white ceramics. Important Iranian objects that have been in Britain for three centuries will also feature, including the Buccleuch Sanguszko Carpet and two oil paintings from the Royal Collection.

The Old and the New will explore how the Qajar dynasty looked back to their predecessors to legitimise their power, whilst also seeking to modernise and scope out new relationships with Europe. The introduction of photography in Iran in the mid-1800s had a profound effect on the way Iranians represented themselves. Fashion will also feature, juxtaposing a full outfit, a short skirt likely influenced by European ballet tutus, and watercolour paintings of Iranian women made for tourists visiting the country. The final part of the section will look at how Iranian craftsmen sought new markets for their skills in the 1880s, when their new clientèle included the V&A itself.

Tim Stanley, co-Curator of Epic Iran said: “This exhibition offers a rare opportunity to look at Iran as a single civilisation over 5,000 years. Objects and expertise have come together to tell one of the world’s great stories in art, design and culture. In the Islamic period, political power in Iran was recast in many different forms, but an overarching sense of history and a deep devotion to Persian literature survived the turmoil of events. In 1501 the Imami form of Shi’ism became Iran’s official religion, giving the population a unifying set of beliefs that set them apart from their neighbours. Shared beliefs, memories of a glorious past and a joy in Persian poetry are still a vital part of life in Iran today.

Bridging the 1940s to the present day, the final section Modern and Contemporary Iran will cover a period of dynamic social and political change in Iran, encompassing increased international travel as well as political dissent, the Islamic Revolution, the Iran-Iraq War, and the establishment of the Islamic Republic. Works by Sirak Melkonian, Parviz Tanavoli, Monir Farmanfarmaian, and Bahman Mohasses will showcase the mid-century explosion of artistic modernisms, brought to a dramatic end with the 1979 Revolution and Iran-Iraq War. The cultural scene flourished again in the 1990s under the mercantilism of Rafsanjani and liberalism of Khatami, and modern technology means Iranian contemporary art exists in a world without boundaries. Today, Iran has an evolving, self-renewing culture: some informed by past traditions, and many radical and experimental both in medium and global expression. Gender, politics, religion and identity issues are frequently multi-layered and often approached with humour and irony, testing the boundaries of censorship and control. Epic Iran will feature work by Iranian artists living in Iran as well as based overseas, with works by Farhad Moshiri, Avish Khebrehzadeh, Ali Banisadr, Shadi Ghadirian, Hossein Valamanesh, Shirin Neshat, Shirin Aliabadi, Shirazeh Houshiary and Y.Z. Kami.

Ina Sarikhani Sandmann, Associate Curator of Epic Iran said: “Contemporary Iranian art is dynamic and exciting, critically self-examining and engaged in the global world, and both intellectual and playful. The rich variety and quality, often radical and experimental and unapologetic in playing with themes such as gender, politics and religion, may surprise visitors – and helps explain why Iran’s long legacy of culture continues to be so relevant to the world today.”

The IHF has a longstanding association with the V&A and has supported an IHF Curator of the Iranian Collection at the V&A since 2009, a post currently held by Sarah Piram.

The exhibition has been generously sponsored by the following: The Godwin Family; Darioush; Cockayne – Grants for the Arts, a donor-advised fund of the London Community Foundation; The Ruddock Foundation for the Arts; The Soudavar Memorial Foundation; The Arah Foundation; Dr Amir Ali Farman-Farma; and The Altajir Trust.

​There will be an accompanying new publication, Epic Iran: 5000 Years of Culture, by Dr John Curtis, Ina Sarikhani Sandmann and Tim Stanley.